Productivity and simplicity, these are two things the modern knowledge worker craves. Google Reader is my "secret weapon" of productivity and I'd like to show you how I get the most out of this program.

What is Google reader?

a) Go to your Google Reader Settings (shown in screenshot)

c) Enable the services that you want to share to.


I use Diigo and need it to be integrated into Google Reader. I found some older directions from the "Jeff is a geek" blog and they work.

Under name, I put Diigo. 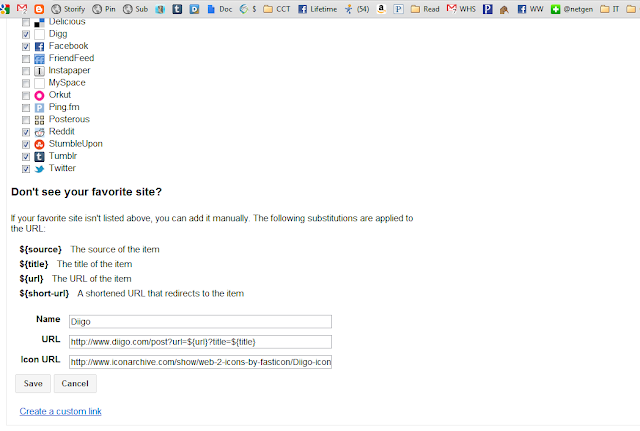 e) Another option is to enable ifttt.com

If this then that is a website that helps you automate things. You can set up many different "triggers" from Google reader that are very simple. For example, some of the most popular recipes as shown in the chart, make use of the star in Google Reader by sending things that are starred to Buffer or Evernote or Instapaper or Delicious or Pocket.

You could also use with any other trigger on ifttt.com including Diigo.  You could also schedule a tweet by tagging mathchat and it could tweet the title and add #mathchat on the end. I'm looking to set that up on my Ifttt.com tweak when I do my next PLN maintenance time. (I schedule at least 2-3 hours once a quarter to prune my google reader and tweak all my social media settings.)

I choose to use tags to do this, although admittedly, I"ve realized I'm not entirely happy with that. So, something tagged tumblr sends to tumblr. The problem is that when it goes to tumblr - the words and tags are there, but I don't necessarily want the tag to say "tumblr." I haven't decided what to do about that, but overall, it is very useful.

For example, I"m finishing up Collaborative Writing in the Cloud and as I've found things relating to the book, everything I tag wiki_book goes automatically to my notebook on the topic in evernote so it is all there when I head to research.

f) Find a great RSS app for your Tablet Device

If you have an ipad or tablet, find a device that allows you to share easily like Mr. Reader to use as your RSS reader (I wrote a snippet at "Mr. Reader is my favorite RSS app" but I am curious if some of you want to know more about it. Let me know, I do requests. ;-)

I found Mr. Reader because I had a list of required places it had to share. At the time, it was the only one that shared to Diigo. It shares to everything and I read my Mr. Reader at least two hours a week as I share and write blog posts.

Google Reader is so powerful because it can power great apps like Flipboard (see 15 Fantastic Ways to Use Flipboard).

It is one of the keys behind my own ability to share and find things. It is an essential tool for researchers and I teach all of my ninth graders and tenth graders how to build their PLN in Google Reader by scraping news, blogs, and more using RSS. RSS is a powerful and essential tool with a name that intimidates smart people from even trying.

I'm very concerned that Google got rid of iGoogle and they may get rid of Google Reader. THIS IS AN INCREDIBLY HELPFUL APP. I USE IT ALL THE TIME. If you don't use it, we'll all lose it. So, please, if you use the product, share with others, so we can keep it. It is a valuable research tool. I also think that Google is missing the boat because they are looking at volume not WHO those people are. If the Maven's as Malcom Gladwell discusses in Outliers: The Story of Success  the mavens, the people who share with everyone and influence a lot of people. If those people, the mavens, are using your product, and you get rid of it, you'll be alienating the wrong people. (Yet, again. iGoogle was a mistake, in my opinion.) 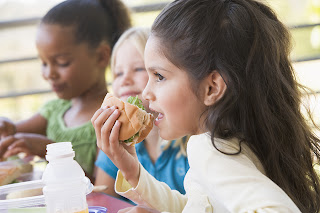