Social Media Syndication Part 1: Where is Your Audience?

Image via CrunchBaseSchools, companies, and individuals all need to share information. Gone are the days that you could print a flyer and plaster it all over your small town to "get the word out." With a million words sending a million messages it can feel daunting to get noticed but in reality, it is simpler (and less expensive) than ever.

With the Generations 2010 study from PEW showing that 61% of all adults 18 and older are using social media websites, one cannot ignore the power of social media to communicate.

Social media is a legitimate, useful, important way to communicate with the world at large and cannot be ignored because one is offended by the term "social." (Most of you will eat a pu pu platter, for goodness sakes! The name doesn't keep you from digging in!)

Social Media Syndication Tip #1 - Go where your audience is.

This article will discuss where the audience is. Next week, I'll be sharing about how to get to that audience easily, inexpensively, and powerfully.

Where is your audience?
Your audience is many places and using multiple devices. They aren't all everywhere but they are somewhere. Let's look at the somewhere.

Email
With 94% of adults 18+ using email, it is the TOP use of the internet across all generations. Note, however that this is less for younger kids with only 73% of kids aged 12-17 using email but enough to still be the top use. Get in their inbox and you've got a person's attention unless you are spammy.

Facebook
As of today, Facebook claims more than 500 million active users with more than half of them logging in daily. Interestingly, the average Facebook user is connected to 80 community pages, groups, and events. The most active users of Facebook are the mobile users  who are twice as active as those who don't use Facebook.

eMarketer says that Americans with Internet access use Facebook at least once a month with 42.3% of the entire population of the US used Facebook in February 2011.

Mobile Phone
Using the handy Wolfram Alpha statistics engine, let's look at US cellular phone usage. (If you're in another country, you can use this same search - just put your country name in.) 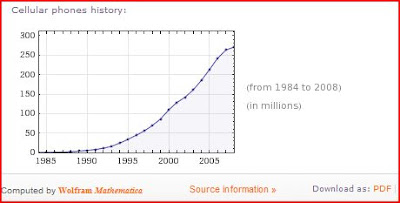 With over 250 million cell phones and just over 300 million people in the US, the United States ranks third in cell phone penetration. In their Generations 2010 study, PEW says that 85% of US adults own cell phones with text messaging and taking pictures being the two non-voice functions that are most popular.

Furthermore, email shows up here too. In the US:


32% of U.S. mobile email users age 18 or older with an Internet-enabled  phone check personal email via a mobile device between one and three times daily.

Morgan Stanley analysts have predicted that the mobile internet will surpass the computer-based Internet by 2015.

Mobile phone syndication is very important for anyone who wants to be noticed. Every website you have should have a clean mobile phone view. For educational websites directed at age 10 and up, this is supremely important! Whether you use a program like Device Anywhere to look at how your site looks on a mobile phone or something from your web hosting company, put this on your list. Or just, open your site on your mobile device. You'll see if it is easy to read.

Twitter
A much lower percentage of people (7% of the total population of the US or 9% of Internet using population) use Twitter. Don't be fooled.

It is always about WHO is using something. In Malcom Gladwell's book Tipping Point

, he talks about "mavens" who have an incredible amount of influence on others. These people who are connectors of others and valid sources of information, drive adoption of products and services. They are important because of their INFLUENCE. Twitter is known to be such a hub of influence full of "mavens" which Mashable calls power users. (See this under eBooks also.)

and download free ebooks all the time. Why do publishers give ebooks away at all? Free ebooks are correlated with increased print-book sales according to researchers at BYU and major authors have said the same.

So, you're not selling books? Well you are sharing information and your content should be readily available on these devices. You can read Cool Cat Teacher on your Ipad or in the Kindle store. (I'll tell you how to do this with your blog in my next post! ;-)

Calendar
Most successful, busy people keep calendars. If this calendar is on a mobile device and you produce calendars and want people to attend, it should be easy for people to add you to their calendar.

Push your events onto their screen and you'll get higher attendance and higher satisfaction with your communication as well. This is very important for schools.

Buying/ Selling/ Giving to Charity Online
If you are a nonprofit, realize that Twenty two percent of adults donated to charities online in 2010! We've recently added PayPal widgets for my school's 40 year campaign.

mp3 Player
Half of adults own an mp3 player with 75% of adults age 18-34 owning one and 21% of adults download podcasts.

It is not just a website any more!
You'd better not have a webmaster - you need a syndication master. You need people producing content that your audience cares about! If you are a school, this can be tricky but simple.

Now that I've proved the case that individuals, companies, and schools that want to communicate need to acknowledge the importance of a different platform than JUST a website, I'm going to spend some time over the next few weeks teaching you how to easily syndicate your content on the web, like I've done with my blog and at my school.

Hint: It is about leverage and making it SIMPLE for you.

This post is part of my Social Media for Schools series: